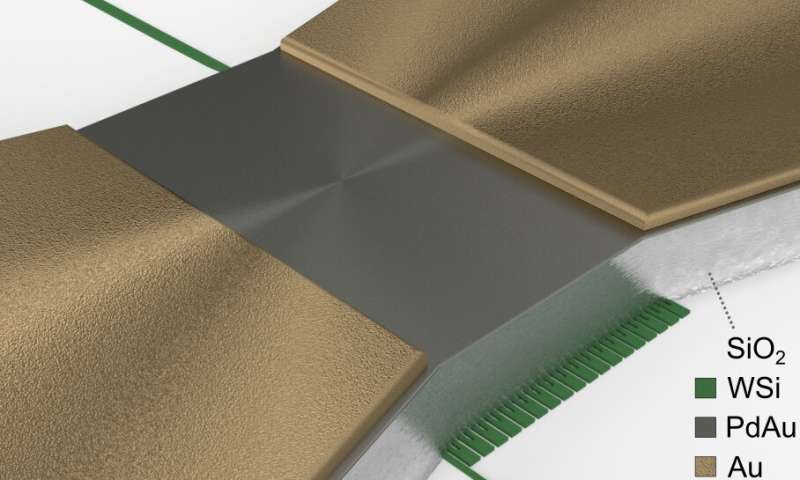 
Many existing techniques for developing quantum and neuromorphic computing tools are based on the use of superconductors, substances that become superconducting at low temperatures. In the same architectures, semiconductors, substances with a partial conductivity, are usually used to achieve top-level control. To work more efficiently, therefore, quantum and neuromorphic systems would require a low-power superconductor/semiconductor interface that has not yet been developed.

Researchers at the National Institute of Standards and Technology in Boulder, NASA’s Jet Propulsion Lab and Lancaster University in the U.K. have recently realized a superconducting thermal switch that can translate low-voltage inputs into semiconductor-compatible outputs at Kelvin-scale temperatures. In their paper, published in Nature Electronics, the researchers demonstrated its potential for interfacing superconductors and semiconductors, using it to drive a light-emitting diode in a photonic integrated circuit.

“In our research, we’re trying to build hardware neurons that will be massively scalable,” Adam McCaughan, one of the researchers who carried out the study, told TechXplore. “In order to build a brain-scale neuromorphic computer, you need to have trillions of neurons and quintillions of connections—that means you have to be extremely energy-efficient and have lots of communication between the neurons. That’s why we chose to combine superconductors and optoelectronics to build the neurons.”

“Part of the reason superconductors are so energy-efficient is that they use very small signals, about 1/1000 the voltage needed in silicon,” McCaughan said. “But that same efficiency also means they have trouble talking with silicon optoelectronics, so we needed to find a way of translating the superconducting outputs into silicon-level inputs.”

The superconducting switch designed by McCaughan and his colleagues leverages the superconductor’s transformation from one state of matter to another, known as ‘phase transition,’ to translate low-level inputs into silicon-compatible outputs. The switch’s main component is a nanoscale superconducting nanowire with two ‘phases’ or ‘states’: the quantum superconducting phase and the resistive phase.