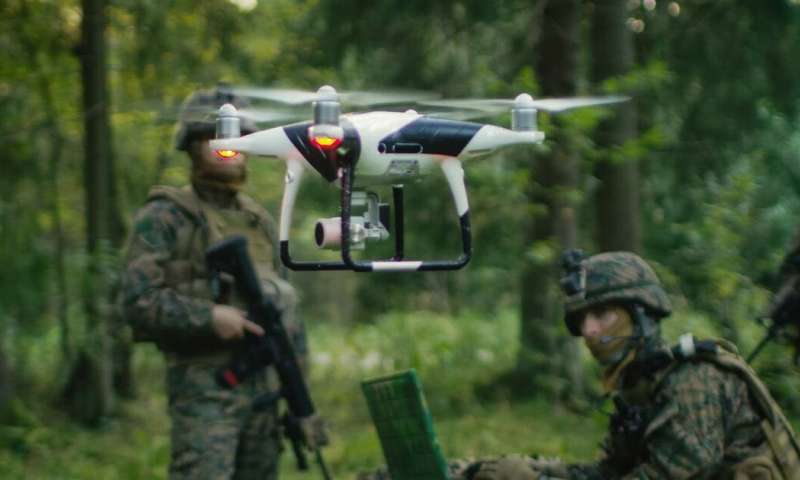 Are military drones a security threat to their own operators? Credit: Gorodenkoff/Shutterstock


Unmanned aerial vehicles, more commonly called drones, are now a fundamental part of defence force capability, from intelligence gathering to unmanned engagement in military operations. But what happens if our own technology is turned against us?

Drones are now being used in a host of applications, including agriculture, media, parcel delivery, and defence.

However, as with all IT technology, manufacturers and users may leave the digital doors unlocked. This potentially leaves opportunities for cyber-criminals and perhaps even cyber-warfare.

Imagine a defence operation in which a drone is sent out to spy on enemy territory. The enemy identifies the drone but instead of disabling it, compromises the sensors (vision, sonar, and so on) to inject false data. Acting upon such data could then result in inappropriate tactics and, in a worst case scenario, may even lead to avoidable casualties.

UK cybersecurity consultant James Dale warned earlier this year that “equipment is now available to hack drones so they can bypass technology controls”.

Drones are relatively cheap technologies for military use—certainly cheaper than the use of satellites for surveillance. Off-the-shelf drones can be used to gather intelligence, without any significant development effort.

Meanwhile, governments have cracked down on illegal civilian drone use, and imposed no-fly zones around secure infrastructure such as airports. Drone manufacturers have been forced to provide “geofencing” software to avoid situations such as the recent drone strike in a Saudi oil field. However, cyber criminals are smart enough to bypass such controls and openly provide services to help consumers get past government and military-enforced no-fly zones.

Russian software company Coptersafe sells such modifications for a few hundred dollars. Anyone can buy a drone from a retail store, purchase the modifications, and then send their drone into no-fly zones such as military bases and airports. Ironically, Russia’s military base in Syria came under attack from drones last year.