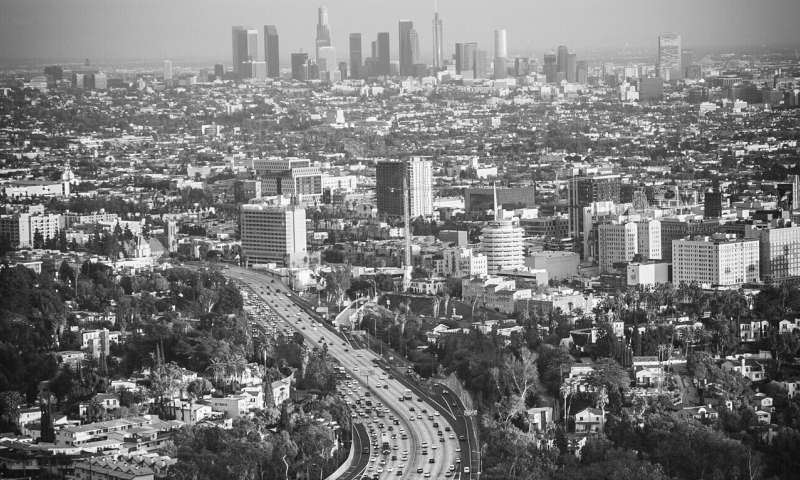 
Can artificial intelligence save the L.A. water supply from a big earthquake?

USC researchers have embarked on an innovative project to prove that it can. Using federal funds, experts at the USC Center for Artificial Intelligence in Society (CAIS) are working with Los Angeles city officials to find solutions for vulnerable plumbing. The goal is to make surgical improvements to strategic pipelines to keep water flowing after shaking stops.

“L.A.”s water pipes are highly susceptible to earthquakes,” said Bistra Dilkina, assistant professor of computer science at the USC Viterbi School of Engineering and associate director of the CAIS. “The infrastructure is aging, and when the shaking starts, pipes break and damage propagates throughout the system. It’s a problem we’re trying to solve.”

The project is part of a larger national research effort using AI for societal good involving scientists at USC. It is a response to recent manmade and natural disasters, such as Hurricane Katrina in 2005, the Deepwater Horizon oil spill in 2010 and the Haiti earthquake of 2010.

Rapid gains in computer science fields like AI and machine learning are increasingly utilized for practical problem-solving in the private sector. Increasingly, government agencies are viewing these technologies as a way to protect lives and reduce costs.

Enter the City of L.A. and its Department of Water and Power (DWP). As part of the city’s Resilience by Design program, it plans to spend $2.85 billion in the next 10 years to upgrade and replace critical infrastructure, about half of which will go toward replacing priority water mains.

The work dovetails with efforts to adapt the city’s water supply for drought and climate change risks while improving local water sources. L.A. imports about 85% of its water via aqueducts vulnerable to quakes across Southern California. The “seismic-resilient pipe network” project with USC would support those efforts with a goal to minimize interruption of water for critical functions.

City officials are particularly concerned about water available for firefighting in the aftermath of a big quake. According to a risk assessment prepared by the DWP, hundreds of fires could erupt in the L.A. basin if faults beneath the metropolis rupture. Firefighting capabilities were compromised due to water pipe breaks after the Northridge earthquake, and fires destroyed much of San Francisco in the aftermath of the great quake of 1906.

“With this research, we hope to get a better understanding of the layout of the city from a critical infrastructure and strategic firefighting perspective,” said Aaron Gross, chief resilience officer for the City of L.A. “By mapping out where critical infrastructure is and using artificial intelligence to map out other critical functions of the city, we can better plan for where to harden our water infrastructure; more specifically, where to target deployment of earthquake-resistant pipes.”

The DWP maintains about 7,000 miles of water pipe, which serve roughly 4 million people over a 465-square-mile area. About 30% of the city’s original cast iron water pipes are more than 80 years old and approaching the end of usefulness. About 14 miles of pipe are slated for replacement next year, a rate that stresses the critical need to determine how and where to upgrade.

The goal is to identify critical public safety facilities—such as hospitals, fire stations, police stations and evacuation centers concentrated in select locations—where pipeline upgrades can make a big difference in a disaster. In addition, Gross said the city hopes to provide a failsafe network of quake-resistant pipes so firefighters can always be within one mile of a water source to fight urban fires.

How AI can help prepare for an earthquake

It’s the sort of optimization challenge for which AI is perfectly suited, Dilkina said.

AI has the ability to simulate many computations and scenarios across layers of data and maps to create computer models to search for the best options that account for the whole picture, rather than piecemeal decisions for individual pipes. With those results, engineers can concentrate pipeline upgrades strategically at key junctures and the most vulnerable sections without having to upgrade every piece of pipe. AI gets the job done faster because it employs algorithms to sort complexity.

“We want to replace aging, old pipes with quake-resistant pipes. But where to invest in new plumbing? If we identify where there’s risk and critical customers, then we can build a subnetwork that can persist and survive an earthquake,” Dilkina said.

In the aftermath of the 6.4 and 7.1 magnitude Ridgecrest earthquakes in July, engineers identified multiple pipeline ruptures. During the 6.7 magnitude Northridge quake, busted water mains flooded some city streets.

Experts at the U.S. Geological Survey (USGS) and the Southern California Earthquake Center (SCEC) at USC estimate a one-in-five chance of a 7.0 magnitude or greater quake on the southern San Andreas Fault within 30 years. That section of the fault arcs from the Salton Sea through Cajon Pass to Palmdale; it has been identified as the likely source of The Big One, a major quake that would slam the sprawling L.A. region. Also, the odds of another Northridge-size quake in the metro L.A. basin are about 60% over the next three decades, the report says.

A hypothetical scenario by the USGS, assisted by SCEC, shows that a big quake on the southern San Andreas Fault would cause extensive damage to the water systems and aqueducts that support L.A.

The seismic-resilient pipe network project for DWP is funded by a $280,000 grant from the Critical Infrastructure Resilience Institute, a U.S. Department of Homeland Security center at the University of Illinois at Urbana-Champaign. Dilkina, the principal investigator, said the research will take one year to complete, after which findings will be submitted to city officials and later submitted for publication in a scientific journal.