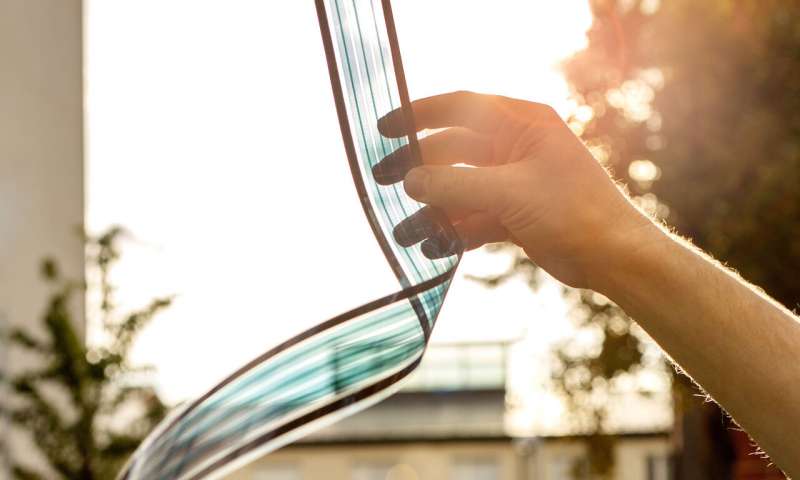 Despite their huge potential, the power conversion efficiency of OPV cells is currently limited by substantial losses in their open-circuit voltage. In addition, past studies suggest that when used for indoor illumination their absorption spectrum is far from optimal.

In a quest to overcome these limitations, a team of researchers at the Chinese Academy of Sciences in China and Linköping University in Sweden have recently designed a non-fullerene acceptor for that could enable high-performance organic photovoltaic cells for indoor applications. This new acceptor, presented in a paper published in Nature Energy, can be blended with a polymer donor to obtain a photoactive layer with an absorption spectrum that matches that of indoor light sources.

The active layer that converts light energy into electric energy in organic solar cells, such as OPVs, is made up of a fine blend of two molecules, which are referred to as the donor and the acceptor. These molecules can essentially be tuned to absorb types of light with different wavelengths.

“In this work, we present a donor/acceptor combination tuned to absorb visible light,” Jonas Bergqvist, one of the researchers who carried out the study, told TechXplore. “The donor and acceptor are tuned to also deliver a high voltage of 1.24V under solar illumination.”

Bergqvist and his colleagues combined the acceptor they developed, dubbed IO-4Cl, with a polymer donor known as PBDB-TF. By combining these two molecules, they attained a photoactive layer with an absorption spectrum that is aligned with that of indoor light sources, which makes it ideal for indoor applications.

“Many high-performance acceptors for organic photovoltaics has had a low bandgap with absorption onset of ~800 nm,” Bergqvist said. “In this work, we have modified the acceptor ITIC to increase the bandgap and this way match the material absorption with the indoor illumination spectrum (matching visible light 400-700 nm).”

The wide bandgap observed in the material devised by the researchers results in a higher voltage, enabling higher energy performance in indoor environments. The researchers evaluated the performance of their acceptor in situations where the only illumination was a low-intensity LED light, simulating typical conditions in a variety of indoor spaces, including living rooms, libraries and shopping malls.

“The digitalization of our society is ramping and Internet of Things and smart devices are a strongly growing market,” Bergqvist said. “Many of these devices consume low amounts of power and efficient light energy harvesting devices can help powering them. The high performance OPVs combined with printing and coating roll to roll production shows a great potential to power connected smart things.”

The wide-gap, non-fullerene acceptor developed by Bergqvist and his colleagues could finally enable higher performance in organic photovoltaic cells within indoor environments. This could have important implications for the development of more advanced solar cell technology, which is not limited to outdoor applications.

“We can easily tune the absorption spectrum of these organic materials, so that we can maximize the efficiency for indoor light conversion,” Feng Gao, another researcher involved in the study, told TechXplore. “This is not possible for commercial silicon solar cells. For this reason, I really believe that organic solar cells provide a unique and promising candidate for indoor applications such as powering the Internet of Things.”

In years to come, the new acceptor for OPV cells developed by this team of researchers could be used to create more energy-efficient devices. In their future work, Bergqvist, Gao and their colleagues plan to continue developing the acceptor together with Jianhou Hou from the Chinese Academy of Science, investigating new ways to improve its performance.