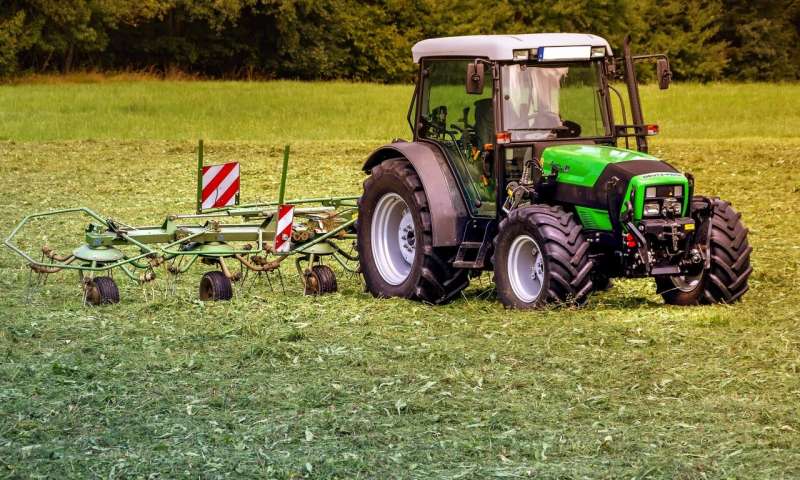 
In 2016, 417 farmers and farm workers died from a work-related injury in the United States, and 312 in Japan, according to the Centers for Disease Control and Prevention’s 2018 agricultural safety report. Overturning tractors are the leading cause of death for farmers around the world.

In order to reduce the rate of overturned tractors, researchers in Japan have developed a model for understanding the conditions that lead to a tractor overturning. They based their model on an unlikely source: A model used to understand the unpredictability of a bouncing ball.

The study was published in the print issue of Biosystems Engineering in June.

“As most farm tractors don’t have suspension systems, violent vibrations can occur in the tractor, and the wheels sometimes depart from the ground in what is called a ‘bouncing’ phenomenon,” said Kenshi Sakai, professor of environmental and agricultural engineering in the Institute of Agricultural Science at Tokyo University of Agriculture and Technology (TUAT). “Standard models of farm tractors have not accounted for this bouncing process.”

Bouncing becomes particularly serious when tractors run on steep slopes such as from a paddy field to a farm road, according to Sakai. If the road slopes more than 18 degrees, the risk of the wheels leaving the road increases significantly. If the front wheels leave the road, the tractor bounces and can cause the back wheels to leave the roads, as well, leading to overturning.

By using the same dynamics modeling system to understand how a ball bounces up from a surface and returns to a surface, the researchers examined how a tractor might respond to various bouncing scenarios through computer simulations. They also ran simulations based on several real accidents that occurred in Japan.

The researchers found that bouncing tractors behave in the same way as bouncing balls: in a nonlinear manner. According to Sakai, the unpredictability must be accounted for in behavior dynamics modelling to predict how a vehicle might respond and, eventually, incorporate a solution to compensate for the bouncing to prevent overturning.

“To describe such serious, violent and unexpected dynamics behavior occurring in farm tractors and vehicles, it is essential to implement the bouncing process in the model,” Sakai said. “Our proposed model could be a new paradigm in farm tractor modeling.”

“We are expanding the proposed tractor bouncing model to describe most of the typical cases of overturning accidents,” Sakai said. “Our ultimate goal is to develop a farm tractor driving simulator which can realize such serious accidents in virtual space for training and education to reduce the fatal accidents caused by farm tractors.