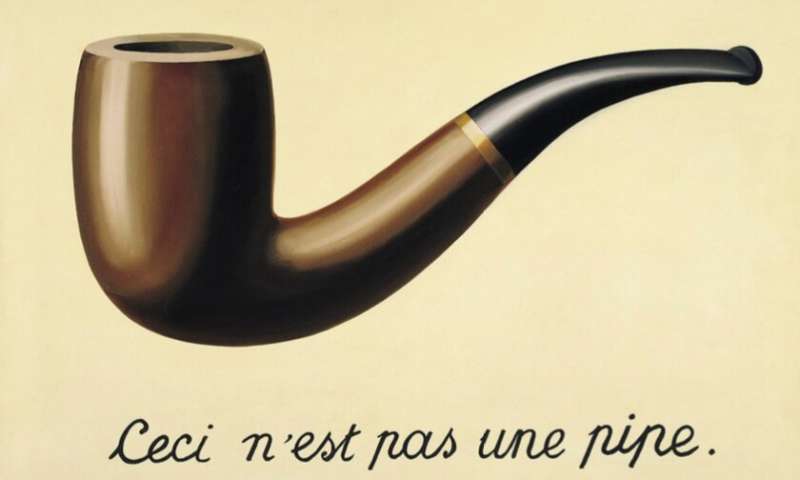 “Rather than the usual pictures of humanoid sex robots and sex dolls that many news outlets and magazines have already shown, we like to think that our research is captured by this painting by Magritte. The words in the painting say: “this is not a pipe.” Magritte’s painting nicely conveys the idea that representation is not the same as reality. Humanoid sex robots are and always will be representations of humans, not the real thing,” the researchers said. Credit: ‘The Treachery of Images’ (René Magritte, 1929).


In recent years, sex dolls have become increasing sophisticated and realistic in their resemblance to human beings, including mechanized components, and are thus now referred to as humanoid sex robots. Some media outlets have gone as far as to suggest that sex robots and other social robots will eventually become almost indistinguishable from humans.

This has sparked a number of interesting ethical and philosophical debates related to the significance of these robots and the possibility that future machines will replicate the physical intimacy between two people. In a recent study featured in Springer’s International Journal of Social Robotics, two researchers at the University of Virginia and the University of Bergamo in Italy have taken a closer look at some of the current arguments and predictions about sex robots, carrying out an ethics-based and critical discourse analysis.

“We started our joint research to debunk some myths and misunderstandings in the media regarding the future of artificial intelligence,” Deborah Johnson and Mario Verdicchio, the two researchers who carried out the study, told TechXplore. “We were struck by how fundamentally flawed some of the ideas were and especially the assumption that the computational version of some aspects of reality are the same as the real thing.”

In their paper, Johnson and Verdicchio essentially challenge the perception of humanoid sex robots as robotic substitutes of lovers and companions. They argue that although humanoid robots may look and act more and more like human beings in the future, the claim that they will eventually replace humans is far-fetched and far from a certainty.

“Our research is aimed at showing that humanoid sex robots could come to be understood in ways that keep their status as machines, albeit technologically very sophisticated machines.” Johnson and Verdicchio said.

Johnson and Verdiccio analyzed the current discourse about sex robots adopting an anticipatory ethics approach. They tried to imagine how technological tools still under development could come to be understood in the future and how this current development could be steered, in order to maximize the positive impact of these tools and minimize negative effects.

“One of our key arguments, which applies to humanoid sex robots, but also to all other technological objects in general, is that technology does not develop in isolation; it is shaped by cultural notions, societal values and conceptual frameworks,” Johnson and Verdicchio said. “In other words, humanoid sex robots are not coming to us out of the blue: social forces are shaping their design and their meaning.”

The critical analysis carried out by the researchers shows that there are many possible future trajectories for the development of humanoid sex robots, all of which will unavoidably be influenced by social concepts and values. This means that the argument that humanoid sex robots will eventually become substitutes for human partners is far from inevitable.

“Our analysis seeks to clarify what is already happening, rather than finding something new,” Johnson and Verdicchio said. “In a way, we would be happy if our readers ‘discovered’ that social and public ways of thinking about and conceptualizing technological objects like humanoid sex robots have a much stronger influence on how such products are designed and deployed by companies than they might have thought before reading our piece.”

The study carried out by Johnson and Verdicchio provides new theoretical insight about the possible significance of sex robots and the meaning that is or could be attributed to these machines by human beings. Their observations suggest that the extreme scenarios sometimes depicted in the media are far from certain or inevitable. In their future work, the researchers will try to debunk other myths and misunderstandings in the media regarding the future of artificial intelligence (AI).

“Firstly, we will take a more technological research path, going more in depth into the latest trends in artificial intelligence: machine learning and neural networks,” Johnson and Verdicchio said. “A lot has already been said about them, but we are not quite satisfied to accept them as ‘black boxes’ that work and give us results without showing us how such results are obtained. Instead, we would very much like to open those boxes for more clarity.”

In addition to investigating other technology-related topics , Johnson and Verdicchio plan to carry out philosophical studies that explore issues such as responsibility and ethics in AI decision-making. The researchers are also interested in exploring the concept of ‘otherness,” particularly in the context of technological stand-ins.