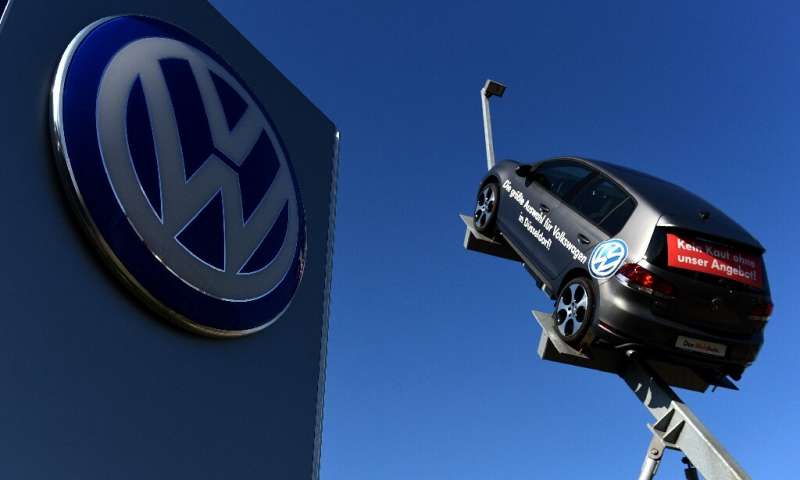 
As Volkswagen faces the wrath of car owners in a mass “dieselgate” lawsuit on its home turf, here’s a look at how the emissions cheating was uncovered and the fallout for the auto giant:

US researchers at the University of West Virginia discover that certain VW diesel cars emit up to 40 times the permissible levels of harmful nitrogen oxide when tested on the road.

September 23: Chief executive Martin Winterkorn steps down but insists he knew nothing of the scam.

April 22: VW announces a net loss for 2015, its first in 20 years, after setting aside billions to cover the anticipated costs of the scandal.

June 28: VW agrees to pay $14.7 billion in buybacks, compensation and penalties in a mammoth settlement with US authorities. The deal, which covers 2.0 litre diesel engines only, includes cash payouts for nearly 500,000 US drivers.

September 21: The first VW investors file lawsuits in a German court seeking billions in damages. They accuse the automaker of failing to communicate about the crisis in a timely way.

December 8: The European Commission launches legal action against seven EU nations including Germany for failing to crack down on emissions cheating.

January 11: VW pleads guilty to three US charges including fraud and agrees to pay $4.3 billion in civil and criminal fines.

As part of the plea deal, VW signs up to a “statement of facts” in which it admits that the cheating dates back to 2006, but it remains unclear how much the top brass knew about the scam.

February 1: Car parts maker Bosch, which supplied elements of the software, agrees to pay nearly $330 million to US car owners and dealers but admits no wrongdoing.

VW says it will pay at least $1.2 billion to compensate some 80,000 US buyers of 3.0 litre engines as well as buying back or refitting their vehicles.

December 6: VW executive Oliver Schmidt, who was arrested while on holiday in Florida, is sentenced to seven years in jail.