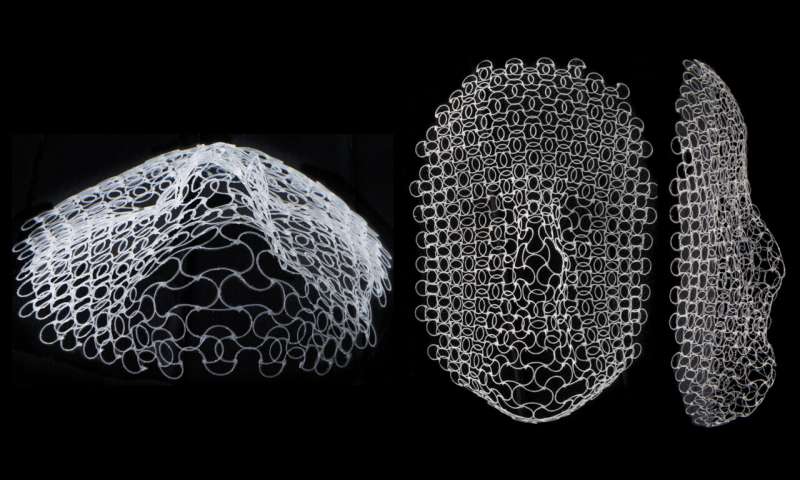 
Researchers at MIT and elsewhere have designed 3-D printed mesh-like structures that morph from flat layers into predetermined shapes, in response to changes in ambient temperature. The new structures can transform into configurations that are more complex than what other shape-shifting materials and structures can achieve.

As a demonstration, the researchers printed a flat mesh that, when exposed to a certain temperature difference, deforms into the shape of a human face. They also designed a mesh embedded with conductive liquid metal, that curves into a dome to form an active antenna, the resonance frequency of which changes as it deforms.

The team’s new design method can be used to determine the specific pattern of flat mesh structures to print, given the material’s properties, in order to make the structure transform into a desired shape.

The researchers say that down the road, their technique may be used to design deployable structures, such as tents or coverings that automatically unfurl and inflate in response to changes in temperature or other ambient conditions.

Such complex, shape-shifting structures could also be of use as stents or scaffolds for artificial tissue, or as deformable lenses in telescopes. Wim van Rees, assistant professor of mechanical engineering at MIT, also sees applications in soft robotics.

“I’d like to see this incorporated in, for example, a robotic jellyfish that changes shape to swim as we put it in water,” says van Rees. “If you could use this as an actuator, like an artificial muscle, the actuator could be any arbitrary shape that transforms into another arbitrary shape. Then you’re entering an entirely new design space in soft robotics.”

Van Rees and his colleagues are publishing their results this week in the Proceedings of the National Academy of Sciences. His co-authors are J. William Boley of Boston University; Ryan Truby, Arda Kotikian, Jennifer Lewis, and L. Mahadevan of Harvard University; Charles Lissandrello of Draper Laboratory; and Mark Horenstein of Boston University.

Two years ago, van Rees came up with a theoretical design for how to transform a thin flat sheet into a complex shape such as a human face. Until then, researchers in the field of 4-D materials—materials designed to deform over time—had developed ways for certain materials to change, or morph, but only into relatively simple structures.

“My goal was to start with a complex 3-D shape that we want to achieve, like a human face, and then ask, ‘How do we program a material so it gets there?’” van Rees says. “That’s a problem of inverse design.”

He came up with a formula to compute the expansion and contraction that regions of a bilayer material sheet would have to achieve in order to reach a desired shape, and developed a code to simulate this in a theoretical material. He then put the formula to work, and visualized how the method could transform a flat, continuous disc into a complex human face.