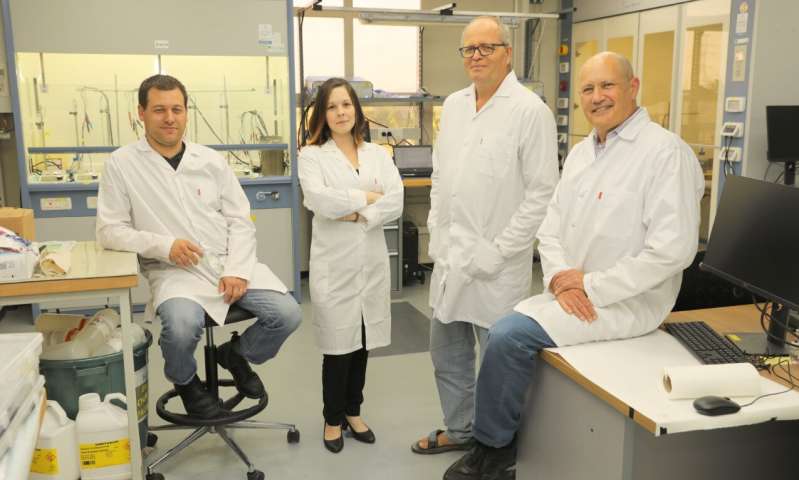 
Electrolytic hydrogen production entails the generation of hydrogen from water using electrical power, which should ideally come from renewable power sources such as sunlight and wind. Although this method of producing hydrogen could be a very promising solution for increasing sustainability, but researchers will have to overcome several key challenges in order for it to become widespread.

In a recent study featured in Nature Energy, a team of researchers at the Technion-Israel Institute of Technology have addressed some of these challenges, presenting a new technique for splitting water that could enhance existing electrolytic hydrogen production methods. Their research draws inspiration from one of their previous studies on photoelectrochemical (PEC) water splitting, in which they tried to combine solar energy and water (photo)electrolysis to generate hydrogen from sunlight and water.

One of the greatest challenges outlined in this previous work was the collection of hydrogen gas from millions of PEC cells distributed in the solar field. In their study, the Technion-based researchers tried to develop a technique that could effectively tackle this challenge.

“Taking photovoltaic (PV) solar plants as the base scenario, the solar farm is composed of millions of individual PV cells, where the current (and voltage) is collected from each and every one of them into a metal grid,” Avner Rothschild, one of the researchers who carried out the study, told TechXplore. “This is easy with electricity, but not so with hydrogen gas.”

In an ideal PEC solar plant of the future, PV cells would be replaced by PEC cells, which can produce hydrogen in a component known as cathode compartment, and oxygen in a separate chamber called an anode compartment. These two compartments should be separated, at the very least by a membrane, in order to ensure that hydrogen and oxygen do not mix, as this would cause an explosion. In addition, the hydrogen gas must be collected from each individual cell.

Creating this setup has so far proved to be technically difficult and expensive, as it requires a very costly piping manifold. Ultimately, this has made the realization of solutions for large-scale hydrogen production by PEC water splitting unrealistic.

“We sought a way out of this challenge, and came up with the idea of separating the oxygen and hydrogen compartments in the PEC cell into two separate cells, so that the oxygen is generated in the solar field and is released to the atmosphere, whereas the hydrogen is generated in a central reactor at the corner of the field,” Rothschild said. “The separation into two cells is made possible by inserting another set of two electrodes, called auxiliary electrodes, that are being charged and discharged simultaneously by OH– ions involved in the water-splitting reaction, thereby mediating the ion exchange between the two cells (which is necessary to close the electric circuit).”

In their previous paper, published in Nature Materials, Rothschild and his colleagues presented a disruptive new approach for water electrolysis (electrolyzers) and photoelectrolysis (PEC) architectures. This promising approach, however, introduced another challenge of regenerating the auxiliary electrodes when they get saturated at the end of a production cycle. The researchers suggested that the electrodes could be swapped at the end of each cycle, but this would be rather cumbersome, so they continued exploring alternative solutions.

“We then discovered that when you heat the auxiliary electrode in the hydrogen cell, after it was charged (to become NiOOH), it releases oxygen gas bubbles spontaneously and regenerates to its initial state (Ni(OH)2),” Rothschild said. “This discovery led to the development of the E-TAC water-splitting process that is presented in the present work.”

E-TAC, the new water-splitting technique proposed by Rothschild and his colleagues, has a high energy efficiency of 98.7 percent, hence it significantly outperforms conventional electrolyzers, which typically have an energy efficiency of ~70 to 80 percent for state-of-the-art devices. A further advantage of E-TAC is that it produces hydrogen and oxygen sequentially, while in most other electrolyzers, they are produced simultaneously. This ultimately removes the need for a membrane separating the hydrogen and oxygen gases, thus greatly simplifying the construction and assembly of the cells, as well as their operation and maintenance.

“Potentially, this could translate into big savings on capital and operation costs, leading to the development of cost-effective water-splitting technology that may compete with SMR (steam methane reforming), offering cheap hydrogen with no CO2 emissions, provided that the electricity comes from renewable sources such as hydropower, solar or wind power,” Rothschild said.

In conventional water electrolysis, hydrogen and oxygen are always produced simultaneously in the cathode and anode compartments, respectively. The compartments are placed as close as possible to one another, to minimize electrical Ohmic losses, and they are separated by a membrane to avoid the creation of an explosive H2/O2 mixture.

In conventional water electrolysis, the two electrochemical reactions described by Rothschild are coupled in both time and space, as they occur simultaneously, in the same cell and at close proximity. Moreover, these characteristics are the same whether the process is applied to alkaline or PEM electrolyzers.