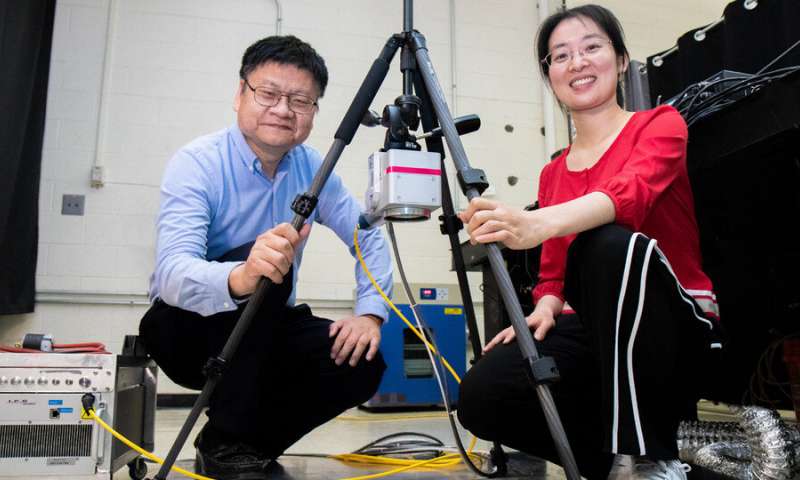 
After months of product development, University of Nebraska–Lincoln engineers are leaving safe harbor to test their prototype on the open ocean.

With support from the U.S. Navy’s Office of Naval Research, Nebraska’s Yongfeng Lu has developed a laser system that prevents and repairs corrosion on aluminum-sided ships. After accomplishing many project milestones—making the laser more portable, simpler to operate and safer than existing methods—his team is approaching its biggest debut yet.

This fall, they’ll test the laser on board a fully operational Navy ship. It’s the culmination of a competitive bidding process; in a pool with many teams from the private sector, the Nebraska team is one of just a few to reach the final testing phase.

“We are dreaming of a ‘shipyard on a ship’ concept,” said Lu, professor of electrical and computer engineering. “The upcoming test is a showcase for our technology and a final step. We’re excited to see the science lead to engineering improvements that add value to the real world.”

Aluminum ships are strong, but the conditions at sea, including prolonged exposure to saltwater and sun, can result in corrosion and cracks. To make repairs, crews must return to a shipyard, where damaged plates are removed and new ones are welded into place.

“This technology has the potential to save the Navy millions of dollars in shipyard time, as well as lost sea time,” said Airan Perez, corrosion and control science and technology program officer at the Office of Naval Research. “As the Navy expands its fleet of aluminum-hulled ships, this technology will become increasingly important.”

The Nebraska laser treats aluminum by heating targeted areas, a process that strengthens the microscopic boundaries around aluminum nanoparticles, which are more likely to corrode.

It is small enough to be suspended from a camera tripod and connects to a shoebox-sized controller with a fiber cord.

The laser generates its beam inside the fiber cord without using sensitive mirrors, making it more robust when operating outside of a controlled laboratory environment.

“We want our laser to work while a ship is in operation, because it reduces time and cost,” Lu said. “This also means we have to make our system very light, which is where other methods fall short.”