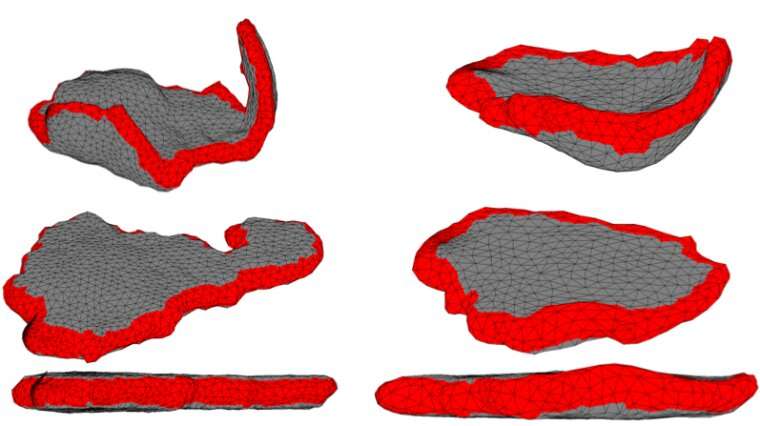 An algorithm developed at MIT takes MRI images of placentas (top) and flattens them to be more easily analyzed (middle and bottom). Credit: Massachusetts Institute of Technology


The placenta is one of the most vital organs when a woman is pregnant. If it’s not working correctly, the consequences can be dire: Children may experience stunted growth and neurological disorders, and their mothers are at increased risk of blood conditions like preeclampsia, which can impair kidney and liver function.

Unfortunately, assessing placental health is difficult because of the limited information that can be gleaned from imaging. Traditional ultrasounds are cheap, portable, and easy to perform, but they can’t always capture enough detail. This has spurred researchers to explore the potential of magnetic resonance imaging (MRI). Even with MRIs, though, the curved surface of the uterus makes images difficult to interpret.

This problem got the attention of a team of researchers from MIT’s Computer Science and Artificial Intelligence Laboratory (CSAIL), who wondered whether the placenta’s scrunched shape could be flattened out using some fancy geometry.

Next month they’re publishing a paper showing that it can. Their new algorithm unfolds images from MRI scans to better visualize the organ. For example, their images more clearly show the “cotyledons,” circular structures that allow for the exchange of nutrients between the mother and her developing child or children. Being able to visualize such structures could allow doctors to diagnose and treat placental issues much earlier in the pregnancy.

“The idea is to unfold the image of the placenta while it’s in the body, so that it looks similar to how doctors are used to seeing it after delivery,” says Ph.D. student Mazdak Abulnaga, lead author of the new paper with MIT professors Justin Solomon and Polina Golland. “While this is just a first step, we think an approach like this has the potential to become a standard imaging method for radiologists.”

Golland says that the algorithm could also be used in clinical research to find specific biomarkers associated with poor placental health. Such research could help radiologists save time and more accurately locate problem areas without having to examine many different slices of the placenta.

Chris Kroenke, an associate professor at Oregon Health and Science University, says that the project opens up many new possibilities for monitoring placental health.

“The biological processes that underlie cotyledon patterning are not completely understood, nor is it known whether a standard pattern should be expected for a given population,” says Kroenke, who was not involved in the paper. “The tools provided by this work will certainly aid researchers to address these questions in the future.”